If you are looking for magic places, Menorca has some

Home > Blog > If you are looking for magic places, Menorca has some

It is impossible to discover all of Menorca in one sitting, you will see why

Menorca is magical, not only for its paradisiacal beaches, but also for all the historical content and its natural heritage. 700 square kilometers of island that surprises in every millimeter. An island limited in space but of corners with infinite magic.

An example of this is the Cape of Cavalleria, north of northern Menorca. A salient of land towards the sea in the north. Cavalleria is one of the most explored and surprising corners for the amount of treasures gathered in a small space. What is special about the Cape of Cavalleria? We explain the gifts Menorca is offering us on the way to the north.

First treasure: the Tramuntana road. To get to the Cavalleria area, you have to deviate from the main road and take this road towards the northern coasts. A narrow road, with dry walls, meadows, cows and llocs (traditional Menorcan homes). A secondary road that runs through one of the most arid and unpopulated areas of Menorca but with a very personal beauty.

Second treasure: the farm of Cavalleria. In the area of ​​Cavalleria there are several farms or llocs, that of Cavalleria is one of those found in the area. This one in particular is left on the right after taking the last detour to the north. On this farm, as on many others on the island, Mahón-Menorca Denomination of Origin cheese is produced and sold. The lloc de Cavalleria is recognized by a square tower that has adhered to the main house, and has its history: just as around the island we find different watchtowers, this is a defense tower. If we look at the Minorcan country houses, in many of them we can find a defense tower like Cavalleria. These towers were built exclusively with one mission: to protect themselves from the constant pirate attacks suffered by the inhabitants of Menorca throughout its history. In this particular, legend has it that when pirate ships were intercepted approaching the island, the whole family climbed the tower in search of protection. The madona, which is what is called the matriarch of the family, he defended his family with a knife, and didn't hesitate to use it when the pirates tried to access the top of the tower. History or legend?

Third treasure: the beach of Cavalleria, one of the referring beaches of the north coast. Generally they are called coves to practically every corner of the Menorcan coast with the exception of some beaches. The difference is that the beaches have more sand than the coves, and as a result there are more people. The truth is that the beach of Cavalleria, despite being the largest on the north coast, does not lose appeal. The reddish color of its rocks, one of the oldest geological formations of the island, its landscape and the sunsets that can be seen from this location, is a spectacle.

Fourth treasure: the lighthouse of Cavalleria, the north of the north. In Menorca there are five lighthouses, plus the lighthouse of the port of Ciudadela, and the beacon of the port of Mahon. The one of Cavalleria is the lighthouse that is located in the most Nordic point of the island. To arrive at the Cavalleria lighthouse is to reach the limit of the island from the north. It was the first lighthouse that was built on this side and the oldest that is preserved to date. It was built in the mid-nineteenth century due to the number of shipwrecks that occurred on this side of the island. The storms, the wind of the Tramuntana and the relief of the seabed, made it very difficult for the ships to arrive intact to the mainland, so that they shipwrecked up to 700 ships. In addition, it is the lighthouse at the highest altitude of the island, specifically rises 94 meters above sea level, however it is the smallest lighthouse in height, measuring 15 meters. Its intense white color and its shape gives it its own touch, which differentiates it from the other lighthouses on the island and the rest of the world's lighthouses.

These are just some of the ingredients that make up the delights of northern Menorca. We have not told you how the wind smells of Menorcan chamomile that grows wild on the way to the lighthouse, or the effect of sun and light on the sea of ​​the north coast. Nor the curious thing about crossing with a family of goats that graze and lives in the cape, nor the surprising thing of the lunar landscape that form the oldest rocks on this side of the island. This can not be told because you have to feel it. 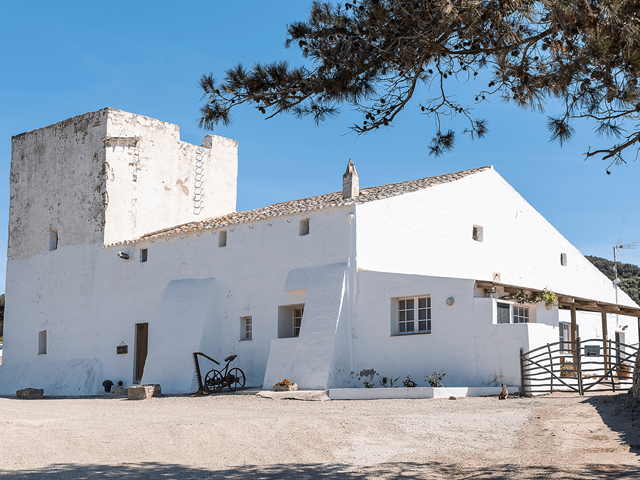 The guides of Jeep Safari Menorca take advantage of this corner with so much magic to show it with the love  and passion it deserves in each excursion. It is not surprising that hikers fall surrendered to the beauty of the Cape of Cavalleria.

If you want to feel the north of Menorca with us, go to the main menu, you will see that you can discover all this in our excursion ISLAND DISCOVERY. But if you also want to put the icing on the cake, discover the SUNSET EXPERIENCE excursion where you can also enjoy one of the most spectacular and exclusive sunsets of Menorca