the 6 lighthouses of Menorca

Home > Blog > the 6 lighthouses of Menorca

Depending on who tells you or where you read it, they will explain that in Menorca there are 5 lighthouses or 7. According to our accounts we get 6 lighthouses.

The oldest lighthouse in the world that still exists is that of Torre de Hércules in A Coruña, Galicia and was built in Roman times in the first century. It is believed that in Mallorca there was a lighthouse built by the Romans, in the current ancient Alcúdia Pollentia specifically, since Mallorca was right in the middle of its journey to the West, but there is no evidence of its existence apart from a bronze sheet that was found in the area written in Latin.

Also, did you know that there are no two equal headlights in the whole world? Each lighthouse is unique, and they characterize each other for two reasons. The first and foremost is your message of light. Each lighthouse emits a different light frequency, this makes the sailors identify and locate them, thanks to the light signals. The second particularity is its shape, its structure or its drawing. For example, in Menorca the lighthouse of Cavallería is whitewashed, that of Punta Nati is marés vista, that of Cap d'Artrutx has 3 lines and a kind of buttresses that gives it a square appearance and a personal touch, that of s' Illa de s'Aire has 4 horizontal lines and Favàritx has a spiral drawing. Its different shapes and drawings help not only to locate us from the sea, but also from land and during the day.

Today the lighthouses of Menorca are managed from Palma, Mallorca, but it has not always been this way. The first lighthouse of Menorca that still stands today was built in the mid-19th century, already in Spanish domain, to avoid the more than 700 shipwrecks registered only on the north coast. After its construction, they were still happening. It is not difficult to believe such a number of shipwrecks if we take into account that Menorca, which is not a flat island, although the highest peak is only 357 meters, evidences the difficulty with which the sailors should meet , in the winter storm of Tramuntana, dominated by the North - South currents of the Mediterranean, and in the middle of the night. 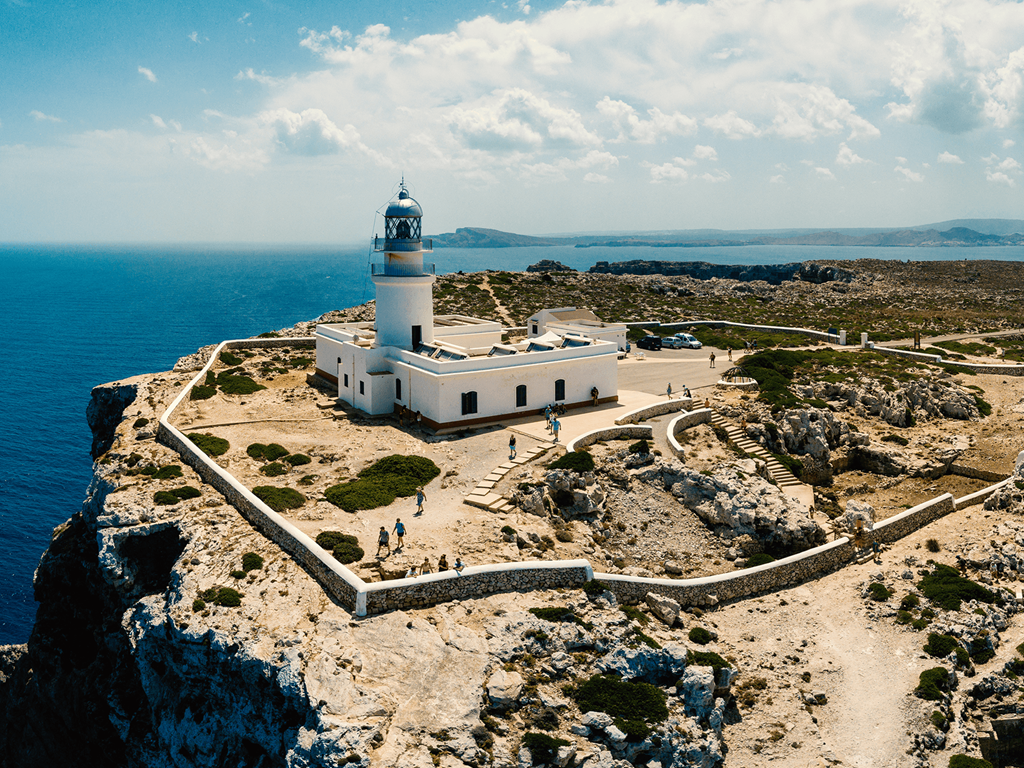 The headlights are located at strategic points, high and clear places so that their light is visible from a distance. Formerly it worked with two butterflies with wick that were fed floating in a container full of olive oil. This system lasted until the end of the 18th century, when both the optics and the combustion system evolved. The light of the lighthouse that was previously fixed, began to spin on a clockwork system, and the stepped lens was a revolutionary change since it managed to collect the light that until then dispersed to project it at a greater distance. This new lighting system was produced in the 19th century. Another curious fact is that formerly in Menorca, the lighthouses were illuminated from October to April, and in summer it was trusted that sailors could guide themselves without problem.

Those who have inquired about the lighthouses of Menorca, will have found that in most of the guides, books and websites are 7. The truth is that there are 6 lighthouses plus a beacon.

The first lighthouse that was built in Menorca was the lighthouse of the port of Mahón, today it does not exist. It was built in 1850 and began operating in 1852. Over the years, half a century later, due to its location, in the ancient ruins of the old San Felipe Castle, and which was also in the middle of a military maneuvering area, They made the decision to tear it down for security, at the beginning of the 20th century and instead a beacon was installed. Another ghost lighthouse is that of Alaior, which was never built. Therefore, today there are 6 lighthouses and a beacon. But it will not be we who downplay and take away privilege from the first lighthouse that gave birth to sailors who arrived in Menorca. The lighthouse of the Port of Mahón, which although today a beacon replaces it, deserves recognition and the memory of what it was, the first lighthouse of Menorca.

JSM visited one of the lighthouses of the island, we enjoyed the spectacular views that these strategic points give us where they are located and we learn about their heritage value. We like to share the cultural legacy of past generations and contribute our grain of sand to keep it alive.

Filter by themes
Nature
The coast of Menorca. Rocks in the North, pines in the South
Go to the article